This post has been extracted from the author’s submission to Australia’s parliamentary inquiry into the nation’s faunal extinction crisis. Supplementary video and radio links have been added to this version.

Depending on the definition used, the rangelands of Australia (often referred to as the Outback) cover between 73 and 81 per cent of the continent. [1] [2]

Many mammals in the rangelands have become extinct during the past century and many species are now threatened with extinction, including the bilby, night parrot, mala, sandhill dunnart and tjakura (great desert skink). [3]

In their 2014 report “The Modern Outback”, The Pew Charitable Trusts highlighted some of the deleterious impacts of pastoralism on the rangelands, including: introduction of feral species such as donkeys, horses, cattle, buffalo, goats and camels; introduction of invasive pasture grasses; land clearing (with habitat loss and fragmentation); degradation of natural water sources; proliferation of artificial water sources; dingo baiting; and manipulation of fire regimes. [4]

“Indeed, in some ways, the impacts of pastoralism on biodiversity and other environmental values are almost pervasive across the Outback landscapes . . .”

Of the factors listed, this article focuses on the introduction of invasive pasture grasses and manipulation of fire regimes.

Around a quarter of more than 600 exotic plant species established in pastoral areas of the rangelands are now considered to be a threat to the natural environment. [5] Five invasive pasture grasses (gamba grass, para grass, olive hymenachne, perennial mission grass and annual mission grass) have been listed under national environmental law as a key threatening process to Australian biodiversity.

The grass can grow more than four metres high, is closely spaced and vigorous.

It is invasive, competes with native grasses and greatly increases the frequency and intensity of wildfires. Its presence has led to ecosystem degradation, habitat loss and species decline. [7]

Fires in areas with gamba grass typically burn from five to twenty times more intensely than in comparable areas without it. Whereas normal dry season fires have few or no impacts on trees, fires fuelled by gamba grass kill them. [8]

Figure 1: A site heavily invaded with gamba grass with a decline in overstory trees due to high intensity fires 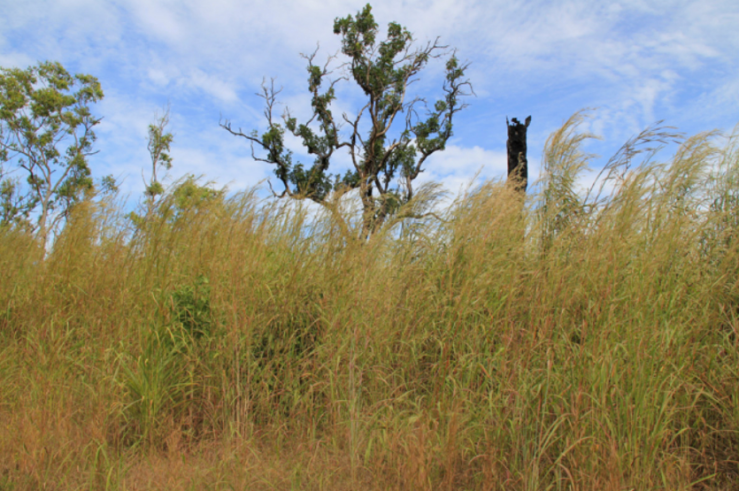 The fuel load with gamba is up to 30 tonnes per hectare, compared to around 6 tonnes with native grasses. [9]

The loss of fauna from tree deaths is extensive, as demonstrated by the fact that tree hollows are essential for 18 per cent of birds, 40 per cent of mammals, 20 per cent of reptiles and 13 per cent of frogs. [10]

Its rate of spread is among the highest of any invasive plant in the world, and modelling has indicated that invasions have the potential to turn the diverse woodlands of northern Australia into vast monocultures. [11] [12]

Referring to the level of infestation, Dr Barry Traill of The Pew Charitable Trusts and co-author of “The Modern Outback” has said: [13]

“That in itself is terrible, it’s a very large area in the top end of the Territory, but the big concern, the big threat, the huge worry is that it could spread right throughout the tropical savannas of the north. This is, people don’t generally realise, we have the largest remaining tropical savanna on the planet, the northern Outback, and it would be terrible to lose that to this invader.”

Gamba has been banned in Western Australia, and its use is restricted by legislation in the Northern Territory and Queensland. [14]

The livestock sector has resisted a call by two hundred scientists for gamba to be banned from sale in Queensland and the Northern Territory.  The cattle president of Queensland’s peak farm lobby group, AgForce, Greg Brown has said: [15]

“It was legitimately introduced and as far as we’re concerned it . . . should remain as one of a suite of pasture species that is available to the pasture industry.”

Referring to the cattle sector, researcher Denise Goodfellow has said: [16]

“. . . the importance of Gamba to the cattle industry has meant that various stations have been allowed to keep grazing cattle on the weed to the dismay of indigenous rangers who find themselves fighting a losing battle trying to control the weed and fight fires, and those of us who care about our wildlife.”

The pastoralists’ tragic legacy is well described by Timothy Neale of Deakin University: [17]

Barry Traill believes the only efficacious way of dealing with gamba is to apply glyphosate, which is commonly marketed under Monsanto’s Roundup label. [18] It seems ironic that anti-glyphosate campaigner, author and sheep farmer Charles Massy is a member of the sector responsible for gamba’s use in Australia. [19]

“The potential value of buffel grass for livestock production is offset by its serious conservation and social impacts. It has been identified as a ‘transformer weed’ of the Australian rangelands (Bastin et al. 2008) due to its ability to transform the basic attributes of habitats. Modelling suggests buffel grass could establish in over 60% of mainland Australia (Lawson et al. 1994).”

Even without the infestation of gamba and other highly flammable exotic pasture grasses, changing fire regimes represent a critical problem for the rangelands and the native plants and animals inhabiting it.

Barry Traill has commented as follows on the negative impact of falling Aboriginal populations in remote areas: [22]

“Drier areas were burnt in particular ways by Aboriginal people. The usual pattern was to have smaller spot fires in different seasons to create a patchwork of vegetation of various ages. This mosaic approach provides the right habitat mix for different animals, particularly some mammals.”

He pointed out that without people to manage the burning, most outback fires are larger and fiercer than they were previously. For example, in the western desert country of the Martu people, the average area of a single fire has increased from 64 hectares to 52,000 hectares.

“The Modern Outback” publication referred to earlier highlighted the extensive benefits that have been derived through the introduction of indigenous ranger groups and the declaration of indigenous protected areas (IPAs). At the time of publishing, there were 67 IPAs covering more than 540,000 square kilometres, which is more than twice the size of the state of Victoria. There were also more than 750 indigenous rangers managing and safeguarding the land.

The Pew Charitable Trusts have campaigned for state governments to permit non-grazing related activities on pastoral leases, thereby “making a diversity of options available for pastoral lease lands and ensuring good governance with a focus on sustainable management, population support and economic viability”. [23]

Fire regimes in the rangelands have also been highlighted by Gerard Wedderburn-Bisshop, a former principal scientist with the Queensland Department of Environment and Resources Management Remote Sensing Centre. [24]

He added context to the extent of burning for livestock grazing in Australia’s tropical savanna (with significant impacts on native animal animals and their habitat), by noting that the 2009 Black Saturday bushfires in Victoria burnt around 4,500 hectares. In comparison, each year in northern Australia where 70 per cent of our cattle graze, we burn 100 times that area. The savanna vegetation is burnt primarily to prevent new tree growth and to stimulate the growth of high-protein green grass.

Gerard Wedderburn-Bisshop has extensively researched climate change in the Australian context and was a co-author of a 2014 land use discussion paper released by climate change campaign group Beyond Zero Emissions and the University of Melbourne’s Melbourne Sustainable Society Institute, along with a subsequent journal paper on the same subject. [25] [26]

In estimating that livestock production is responsible for around 50 per cent of Australia’s greenhouse gas emissions, the researchers allowed for various factors ignored or attributed to other sectors in official estimates, including land clearing for livestock production, related loss of soil carbon, tropospheric ozone from savanna fires, and the shorter-term impacts of methane emissions.

The climate change impacts of animal agriculture have adversely affected native animals directly through factors such as heat and water stress and indirectly through loss of habitat.

It is difficult to overstate the negative effect on Australia’s native fauna of livestock production since European settlement. The effects are ongoing and dramatic, with the sector’s strategic marketing approach seeking to portray a vastly different image to the general community.

If we are to protect and maintain our precious wildlife, we must honestly and directly address the critical problems we have created. Government support for powerful livestock industry forces would contribute to long-term adverse outcomes for our native animals and Australia as a nation.

Such support is no longer an option. The time to act is now.

[2] Australian Government, Department of the Environment and Energy, Outback Australia, The Rangelands, https://www.environment.gov.au/land/rangelands

[7] Australian Government, Department of the Environment and Energy, “Question and answer: How does the listing of gamba grass and four other grasses as a key threatening process affect me?”, https://www.environment.gov.au/resource/question-and-answer-how-does-listing-gamba-grass-and-four-other-grasses-key-threatening