A key factor in considering climate change is the global warming potential (GWP) of the various greenhouse gases.

Under the United Nations Framework Convention on Climate Change (UNFCCC), the emissions of different gases are aggregated for measurement purposes by converting them to “carbon dioxide equivalent” (CO2-e). It is analogous to converting several different currencies to a common denomination.

The gases are converted to CO2-e by multiplying the mass of emissions by the relevant GWP, representing the warming impact of a unit mass of the gas relative to that of CO2 over a specific period.

Over a 100-year time horizon, the multiplier for methane (CH4) is 28 before allowing for the effect of climate-carbon feedbacks, and 34 with those feedbacks. The corresponding figures for nitrous oxide (N2O) are 265 and 298. [1]

Figures 1(a) and (b) compare the effects of one-off emission pulses of CO2, CH4 and N2O. [2] The size of each pulse reflects the amount of the relevant gas required to achieve the same level of warming as one tonne of N20 (the most potent of the three) over a 100-year time horizon. Up to the 100-year point, the area under each curve is equal, indicating an equal amount of warming. [Footnote 1]

The focus of the charts is the timing, with CH4’s impact being far more pronounced than that of the other two gases in the early period but then quickly falling away. 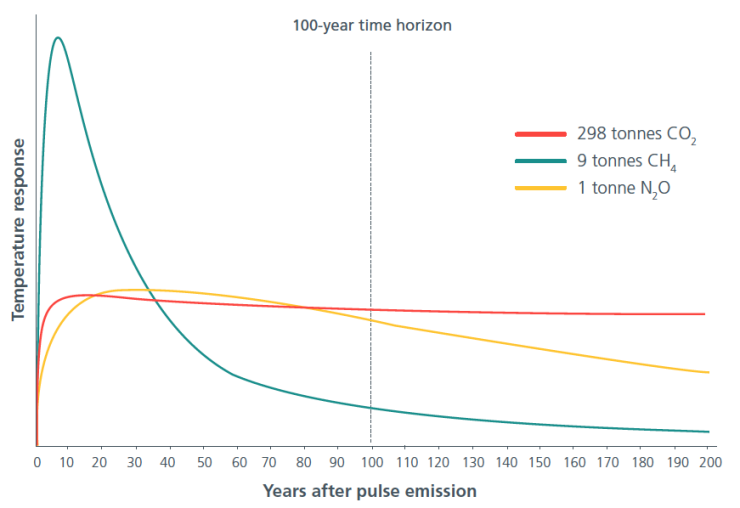 Figure 1(b): Stand-alone charts up to 100 years adapted from Figure 1(a). The area under each curve is equal, indicating an equal temperature impact over the 100-year time horizon.

Because of CH4’s pronounced impact in the early stages following its release, a 20-year (or shorter) GWP may be more valid than the more widely used 100-year figure for the purpose of considering tipping points and critical feedback mechanisms potentially leading to runaway climate change.

Perhaps even more important, reduced CH4 emissions would provide rapid benefits while essential infrastructure required to transition us from fossil fuels was established.

There is no firm requirement to use a 100-year time horizon. The Intergovernmental Panel on Climate Change (IPCC) has stated:

“There is no scientific argument for selecting 100 years compared with other choices . . . The choice of time horizon is a value judgement because it depends on the relative weight assigned to effects at different times.” [4]

The charts appearing in this article are based on the IPCC’s current estimated GWPs. Scientists from NASA’s Goddard Institute for Space Studies (GISS) have estimated GWPs for CH4 of up to 33 for 100 years [5] and up to 105 for 20 years [6].

NASA’s figures, which would show an even more pronounced spike for CH4 than shown in Figures 1(a) and (b), take into account the effects of aerosol responses. Aerosols are airborne particulates or droplets. They occur naturally and from human activity, and include sulphates, nitrates, and dust from smoke and manufacturing.

Although we must not ignore the long-lived nature of CO2, we must also recognise the dramatic short-term impacts of CH4 if we are to have any chance of overcoming the climate crisis.

[2] Parliamentary Commissioner for the Environment (New Zealand), “Farms, forests and fossil fuels: The next great landscape transformation?”, March 2019, Figure 4.1, p. 100, citing Reisinger, A. 2018. The contribution of methane emissions from New Zealand livestock to global warming. Report to the Parliamentary Commissioner for the Environment. https://www.pce.parliament.nz/publications/farms-forests-and-fossil-fuels-the-next-great-landscape-transformation and https://www.pce.parliament.nz/media/196523/report-farms-forests-and-fossil-fuels.pdf

djhayazaa, Shutterstock ID 1718232061, Earth in the space. Blue planet for wallpaper. Green planet or Globe on galaxy. Elements of this image furnished by NASA.

© Paul Mahony and Planetary Vegan 2012-2020. Unauthorized use and/or duplication of this material without express and written permission from this site’s author and/or owner is strictly prohibited. Excerpts and links may be used, provided that full and clear credit is given to Paul Mahony and this website with appropriate and specific direction to the original content.