In July 2019, Australia’s federal parliament invited submissions in relation to  the Criminal Code Amendment (Agricultural Protection) Bill 2019. The bill introduces new offences for individuals who use the internet or other “carriage services” to incite another person to trespass, damage, destroy or steal property on agricultural land.

Earlier, in June 2019, the parliament of the state of Victoria announced a public inquiry into the impact of animal rights activism on the state’s agricultural sector. The Legislative Council’s Economy and Infrastructure Committee invited submissions from anyone who had information or views they wished to share.

My submissions can be accessed via the images below, including a supplement to the Victorian submission. 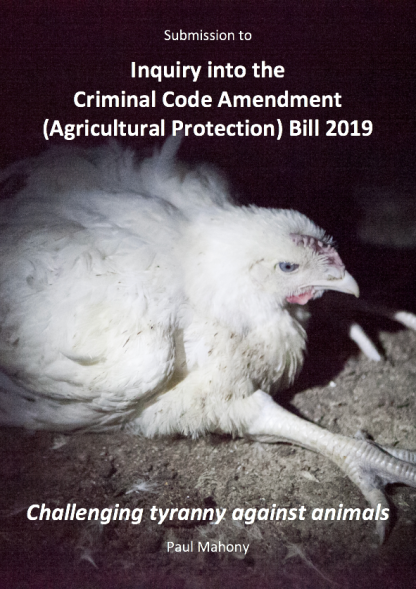 Here’s a summary of my key points in each:

Uncovering the truth: The case of Oliver’s Piggery, Tasmania

Humans have almost complete power over the other animals with whom we share the planet.

However, we largely ignore that responsibility, and abuse our power, by forcing tens of billions of animals globally and hundreds of millions in Australia each year to become units of production.

It is hoped that the material contained in the submissions provides each committee with some perspective that may otherwise have been lacking when considering their position on animal activism.

“A beautiful face, with someone inside – sold to the highest bidder”, © Bear Witness Australia, “Witness #5, http://bearwitnessaustralia.com/

Other image credits are included in the submissions.

Government of Victoria, Minister for Agriculture, “Ending Puppy Farming Once And For All In Victoria”, 29 June 2018, https://www.premier.vic.gov.au/ending-puppy-farming-once-and-for-all-in-victoria/  and Twitter, @DanielAndrewsMP, 5:15 pm, 10 Oct 2016

Animals Australia, “Where do puppies come from?”, https://www.animalsaustralia.org/puppies

Victorian Government, Department of Jobs, Precincts and Regions, About Us, https://djpr.vic.gov.au/about-us

Beyond Carnism, “What is carnism?”, https://www.carnism.org/carnism

Giuffre, E., “Speciesism: Why do we love one animal but condemn the other?”, Voiceless, Undated, https://www.voiceless.org.au/content/speciesism-why-do-we-love-one-animal-condemn-other

Rezalan, J., “British suffragettes from 100 years ago are hailed as heroes, yet the government still considers them criminals”, The Washington Post, 6 February 2018, https://www.washingtonpost.com/news/worldviews/wp/2018/02/06/british-suffragettes-are-hailed-as-heroes-yet-theyre-still-considered-criminals/?utm_term=.678877259dae

The King Legacy, a partnership between the estate of Dr Martin Luther King, Jr. and Beacon Press, “The King Years”, http://www.thekinglegacy.org/content/king-years